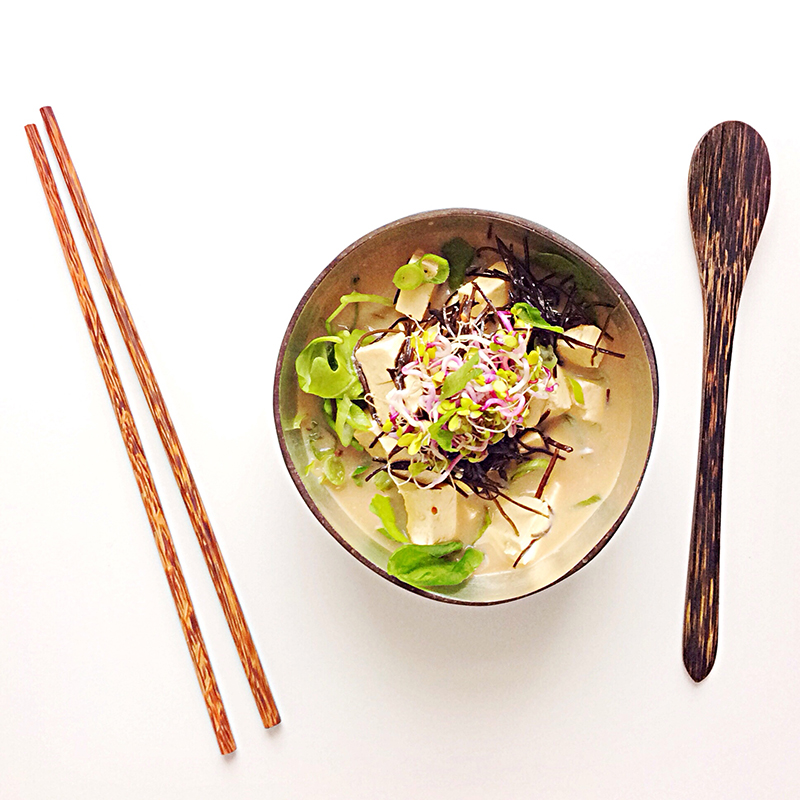 When I’m on holiday, I allow myself to let go a little around what I should be eating. It’s much easier to enjoy each moment and a new culture when you dive in and avoid spending the entire trip chasing vegetables. That said, after a recent weekend in Lisbon, including several unnecessary custard tarts trials, I returned home with a strong urge to eat super clean. My usual go-to clean-food of choice is Kichidi: the ayurvedic comfort food that brings the body tremendous relief via its digestive simplicity. However, because I follow my intuitive eating + shopping skills, I found myself with a cart full of Japanese culinary staples such as tofu, miso and wakame. As I started preparing my miso soup the next morning, I was flooded with the intuitive urge to return to eating MACROBIOTIC for a while

The basics of Macrobiotics

One (fabulous) thing about this diet is that it’s relatively loose in its structure. Macrobiotics doesn’t have a strong or rigid outline or mandate; this is especially true around the concept of eating animal protein, which of course I LOVE.
Below are the outlining principals of the Macrobiotic diet:

Personally, I totally dig this list. It checks so many of my smart-nutrition boxes. The macrobiotic diet, which just never became as trendy as some diets (holy cow Paleo), may still have its day of glory in the West. Here is a closer look at some of the highlights for me:

Nightshades are a classification of plants known as Solanaceae. Although the list of nightshades plants is extensive, the most commonly consumed are sweet or bell peppers, tomatoes, eggplant and potatoes. Some less-known nightshades include goji berries, cayenne pepper and ashwagandha. Although many people do have the enzymes needed to properly breakdown the toxic alkaloids in nightshades, many do not. Because all vegetables have nutrients, it can seem counter-intuitive that your vegetable choices may be at the root of your troubles. For those who cannot tolerate nightshades, they result can be extreme inflammatory, producing low-level toxicity that can lead to many health issues. Almost all autoimmune protocols illuminate nightshades and for many it can be a fairly easy adjustment to make with big results. One would simply go 30 days without nightshades to see if there are any noticeable positive changes.

The fundamental ideology of Macrobiotics is in the understanding of the Yin/Yang qualities of the food you eat. Similar to the Ayurvedic principles of the Rasa’s, knowing your inherent qualities (both fixed and changeable) guide you to food choices that best serve you. An example of yin/yang in macrobiotics: Yin foods are wet and cold whereas Yang foods are dry and warm. The food that grows in the environment we live in hold the same beneficial energies we need. In other words, be eating imported fruits that are out of season in a “green smoothie” all winter long could easily through you out of balance. In macrobiotic thinking, it is believed that if we eat foods that are whole, local and in season, that our bodies get the perfect yin and yang and yang qualities needed from the natural environment in which we live. Macrobiotics teaches that when we harmonize with nature and our natural environment we experience strength, freedom, flexibility, and great happiness.

In Defence of Grains

I fully acknowledge that there is substantial evidence showing the over-consumption of grains is at the root of many digestive and health issues. I think the key word though is ‘over-consumption’. The term ‘ancient grains’ means that ancient civilizations survived by both cultivating them and consuming them. We humans seemed to do well with grains for a very long time. In Peru, the three ancient grains of the Incan empire were: Quinoa, Kiwicha (Amaranth) and Cañihua: all still thoroughly enjoyed today. Besides being gluten-free grains, collectively these 3 grains provide very impressive amounts of iron, fiber and many other nutrients. I believe that if grains work for your constitution they can be a wonderful ingredient to incorporate into a healthy diet.

Intuitive eating to me means being tuned-in and turned-on to the innate intelligence of your body. There is nothing to learn, nothing to follow, just a conversation that becomes more and more prolific and informative the more you hone your intuitive skills. Intuitive eating has nothing to do with following specific diets or food trends; it is, in fact, quite the opposite. That said, what the diet trends, such as Paleo or Macrobiotic bring to the experience of intuitive eating is simply more material with which you can play and experiment.

Hope you feel inspired to play!