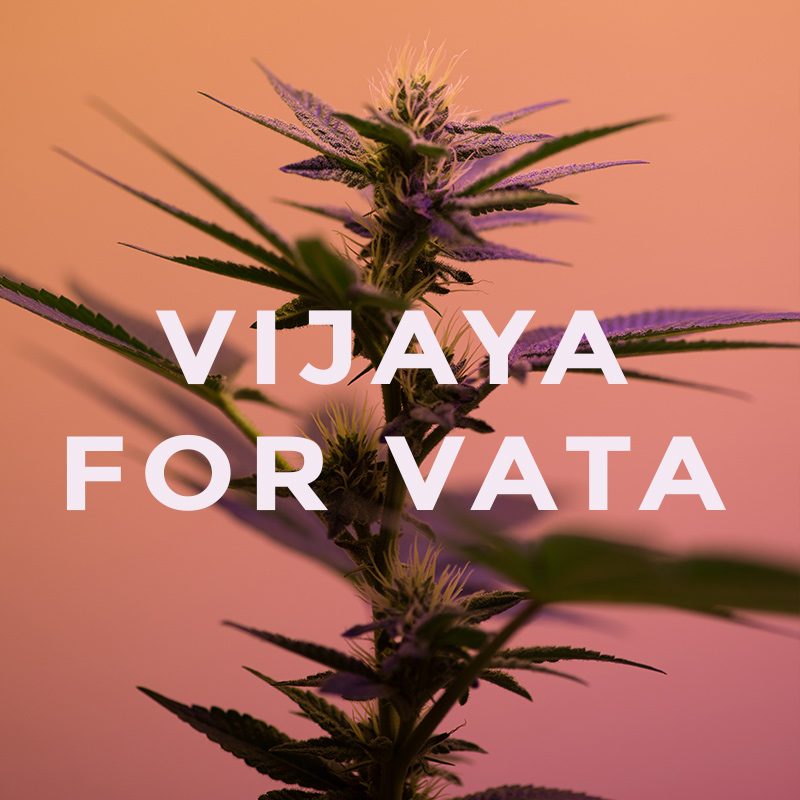 Vijaya, Sanskrit for Cannabis also known as Bhanga in Hindi, used by Ayurvedic physicians for hundreds probably thousands of years and definitely holds a place in the Ayurvedic pharmacology…but with all the attention cannabinoids have been receiving lately, (about time) I was curious… why it’s not more common in the modern Ayurvedic vernacular…?

Since ANXIETY is considered a VATA IMBALANCE in Ayurvedic medicine (as is insomnia, the racing mind, looping thoughts, changeable or unsteady thinking, fear or nervousness and ALL imbalances of the nervous system) and since we are living in the ERA of the aggravated Vata dosha…more than ever before in human history are we collectively suffering from the psychological imbalances of Vata dosha, (think multi-level multi-tasking, chronic overstimulation, digital dementia and social scrolling addictions). We’re all pretty much now on the CBD chill train, and thank god for that. Youtubeable Ethan Russo, a neurologist and psychopharmacology researcher and expert on cannabis has said there are more cannabinoid receptors in the brain than there are for all of the neurotransmitters put together. Hello! That’s got to count for something.

Cannabis Sativa is indigenous to India, so what is the Ayurvedic perspective on Cannabis as medicine? Turns out. It’s pretty complicated, or at least what I’ve found so far…

According to Ayurveda, marijuana is mainly clumped into the same area as all mind-altering substances including alcohol and is said to have a dulling effect on the mind (in a bad way). Nervine herbs such as Brahmi and Amla were actually used to remedy the toxins accumulated from Vijaya as well as repair the damaged nervous system. But obviously, there were no isolates 3000 years ago and certainly not the awareness that we had Cannabinoid receptors located throughout the body, not to mention an endocannabinoid system, which is a fairly new discovery. Ayurveda also says though, that everything that exists can be medicine, which I love.

I’m fascinated by the marriage of new science with indigenous medicine. Hemp is such a revered plant and the CBD component of cannabis is indisputably helping so many people with literally dozens of health issues. One of the main areas of study with cannabis is in treating nervous system issues as well as psychological issues that can also be seen as Vata Imbalances. I say Vijaya as a modern Ayurvedic remedy for these common issues will continue to grow and that Vijaya for Vata disturbances of the mind will not be going anywhere for now.

Meanwhile, on www.holifestival.org  I found a recipe for a ‘flavoured bhang drink’ which I have adapted slightly to make a more healthy version. Obviously, the amount of marijuana used must be appropriate for you and it is best to start very light.  You can make this drink using CBD instead (much easier) which is non-psychoactive but still extremely pleasant.

Bring the water to a rapid boil, then turn the heat down to a low simmer, add the marijuana and low simmer for 1-2 minutes then remove from heat, cover and let steep for at least 10 minutes undisturbed.

Place the brewed marijuana pulp into a mortar, add the almonds and the garam masala and with a pestle grind all together, adding some liquid if necessary to get a juicy aromatic paste. This is a nice time to set your intention for the plant medicine while grinding consciously.

Once a nice paste is formed, add a little more liquid and strain the paste through a piece of muslin cloth or sieve, squeezing everything out and adding the liquid to the marijuana brew.

Now melt the ghee or coconut oil in a small saucepan, add any additional

Add the marijuana brew, you might want to use a milk frother to incorperate the ghee or coconut oil.

Once warmed, stir in the honey and drink.